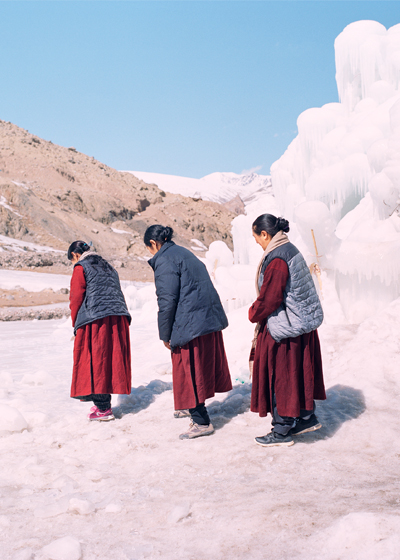 Born in 1985, Vasantha Yogananthan lives and works in Paris. In 2014, he co-founded the publishing house Chose Commune and published his first book, Piémanson, which was nominated for MACK First Book Award and Kassel Best Book of the Year. In 2015, Vasantha Yogananthan was the recipient of the IdeasTap/Magnum Photos Award (category international) to help him fund A Myth of Two Souls, his project on the Ramayana in India. In 2016, he was awarded the Prix Levallois. In 2017, he was awarded the ICP Infinity Award as Emerging Photographer of the Year.

A Myth of Two Souls – a 7-book project spanning over 7 years (2013-2019) – is a project that he believes will evolve in directions he can't yet foresee. Moving away from the documentary genre that describes the early stages of the project, he has spent the last year working with a local artist to revive the tradition of hand-painting. In 2016, he started another collaboration with two artists specialising in the tradition of Madhubani paintings.

The more his practice grows, the more he perceives photography as a malleable material open to interpretations. Deeply attached to analog photography, he works with both large and medium-format, mostly at dawn and dusk. His use of natural light and his color palette is influenced by Impressionism.